How to configure a Delta-style English oto.ini

This is based on Delta's official guide for configuring Delta-style English banks. It will cover how to create a base oto and how to properly configure each alias. While not a direct translation of the original, all the information should be correct. If you're familiar with Delta ENG and notice issues, let me know.

This guide assumes you already know how to oto Japanese CVVC. Delta's "official" CVVC oto guide can be found here (in English); you might want to read it even if you can oto CVVC.

If you are stuck on otoing anything shown here and want examples, Teto English is a good starting point; her reclist is very similar to List #3, which has everything you might need examples for.

The information provided here will also give some insight on otoing voicebanks using Peiton Macaron's reclist, as it's derived from Delta EN, but you will probably get more relevant information looking at VCCV or ARPASING guides (this does not explain how to oto [- C]/[C -] aliases or other things added to Peiton English).

This guide was assembled by PSP, and cannot be reprinted without permission. Please link to this page instead.

Creating a base oto

Download the Delta reclist here (Click "Number #" for your preferred reclist)
The zip will come with mkototemp.ini, dubalias.ini, and presamp.ini files.
↓
Record samples (I recommend using a 4-beat BGM like Salem's or the VCCV English one)
↓
Put the mkototemp.ini file from the reclist zip next to mkototemp.exe.
Modify the [TEMPO] and [OFFSET] parameters in mkototemp.ini to match your recordings. [OFFSET] is measured in milliseconds. Drag and drop the reclist you recorded with onto mkototemp.exe.

It is important to note that depending on the reclist, you may need to create "h-" aliases by hand. For example, if you input the lyrics [ask][him], the sound will drop because there is no alias for [k hi] in the oto. Everything else should be fine. (Personal testing: when recording List #3 i had to create most [V h-] aliases by hand while otoing. It should be obvious if things are missing.)
↓
Base oto is created
↓
Put the dubalias.ini file from the reclist zip next to dubalias.exe. Drag and drop the generated oto.ini onto dubalias.exe. (This step is similar to setparam's option "Substitute お for を if not recorded".)

The specific duplicated aliases are:

(After personal testing, it might be best to use dubalias after otoing the base list, and then checking the new aliases to see if any changes should be made. Either will be fine, though.)
(Also, if you recorded a list that has VV strings in it, make sure to oto the diphthongs as instructed below.

[CV] and [- CV] are configured the same as in Japanese CVVC.
However, diphthongs (eI, aI, aU, OI, oU) need to be handled a bit differently.

For example, when configuring seI, you should only hear se.
If you can hear the I sound, it's been configured incorrectly.

Because of this, when a phrase ends with a diphthong, like [seI], the I sound will be missing.
Therefore, be sure to use the proper ending sound, like [seI][eI-].

[VC]s are configured the same as in Japanese CVVC.
However, diphthongs (eI, aI, aU, OI, oU) need to be handled a bit differently.

Used in phrases that end with a consonant.

The left blank, overlap, and preutterance are handled the same as VC/VVC.
Consonant: Immediately after the last consonant sound
Right blank: Silence

By the way, the area referenced by presamp for note length is the length between the preutterance and the consonant.

Onset consonant clusters are 2~3 consonants at the start of a word (i.e. "st" in star, "spr" in spring).

Since recording [CCV] and [CCCV] samples makes the reclist very, very long, Delta reclist #2 and beyond uses [- CC] and [CC] aliases instead.

Two consonants (when the second consonant is a plosive) 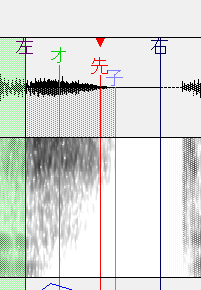 Two consonants (when the second consonant is not a plosive) 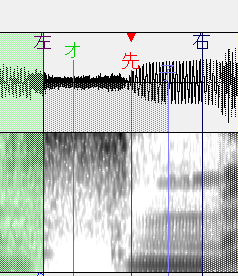 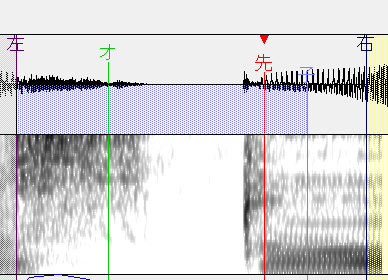 How to configure onset consonant clusters like [CCV] and [CCCV].
These are only used when configuring banks recorded with Delta English lists #1 or #0. 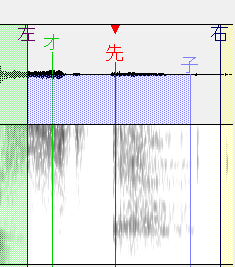 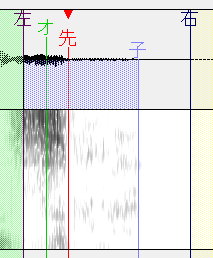 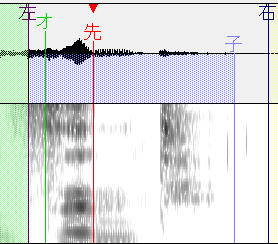